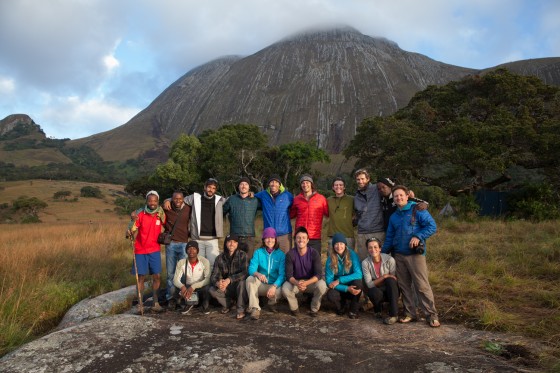 Flavia Esteves: Ph.D. in Entomology, and postdoctoral fellow at California Academy of Sciences, USA. Flavia has been studying ants for more than 10 years, integrating fieldwork, taxonomy, and community ecology analysis to discover and describe ant diversity and patterns of distribution, particularly in rainforest habitats. She has extensive field experience in remote locations including Argentina, Brazil, Madagascar, Peru, Saudi Arabia, Uganda, United States, and Venezuela. She also collaborates with AntCat (An Online Catalogue of the Ants of the World), disclosing and making available to the scientific community the current knowledge on ants.

Caswell Munyai: MSc in Environmental Sciences and currently finishing his PhD studies at the University of Venda, Limpopo Province in South Africa. Caswell’s research focus is on ant (Formicidae) diversity patterns along altitudinal gradient. For the past six years, has has been involved in a long-term monitoring study along an elevational transect in the centre of endemism, Soutpansberg Mountains of South Africa. The project documents the response of ants to global climate change. During these past years, he also has travel as far as Australia, Uganda, and Madagascar for his research activities.

Harith Farooq: Mozambican herpetologist with a MSc in Biology and current member of the Faculty of Natural Sciences at Lúrio University in Pemba, Northern Mozambique. Harith was born in Maputo, Mozambique, and received his undergraduate degree and masters at University of Aveiro, Portugal.  He is also Dean at Lurio Universty and is the curator of Lurio’s species museum, a lecturer, and a researcher. Has done herpetological surveys in Pemba, Nampula, Vamizi Island, Quirimbas National Park and Gorongosa National Park, all in Mozambique.

Geraldo Palalane: Geraldo is the leader of our Mozambique-based Conservation from LUPA (Associação para o Desenvolvimento Comunitário). Geraldo has21 years of experience in Rural Development, and started with HELVETAS with whom he worked for for 14 years in Rural Development in Maputo and Gaza Province. He, and Luis Dinis, created LUPA in 2007, after HELVETAS closes the Program in South Mozambique. Geraldo has a Masters in Tourism Management from the Instituto Superior Monitor Maputo and Diploma in Forestry: Zimbabwe College of Forestry.

Richard Halsey: Richard is a biologist by training, an environmentalist at heart and a wildly passionate rock climber. Work has ranged from albatross research to business manager, canyoning guide to bean counter. Currently, when not off searching for new climbing routes on remote cliffs, he works at a small Non-Profit organization doing its bit for a better tomorrow: 90×2030. Over the years he has become increasing interested in projects that have value, that inspire positive action, that protect our ecological systems and that sustainably enhance the lives of others.

Charlie Harrison: An avid ski racer, mountain biker, climber, and all-around outdoorsman, Charlie is our youngest team member. He is on the last leg of a gap year that he has primarily dedicated to competitive ski racing. Although young and inexperienced on this type of an expedition, he knows that he will find himself in his element on the slopes of Mount Namuli. Charlie will bring energy, keenness, and aptitude to the group, as well as a helping hand. Charlie is one of our Lost Mountain Positive Tracks Next Gen Ambassadors.

Grant Bemis: Grant has just completed his undergraduate studies at Eckerd College in Environmental Studies and Biology and is a well-traveled adventurer already at the age of 22. An enthusiast of remote backpacking, fly fishing and photography, Grant believes that raising awareness to preserve habitat is a brilliant way to make a difference. He hopes to someday lead his own research/adventure expedition. Grant’s passion for combining physical outdoor challenges with science and conservation will be a great asset to the team. Grant is one of our Lost Mountain Positive Tracks Next Gen Ambassadors.

Eric Wilburn: Trained as an environmental engineer, Eric is currently a Peace Corps Volunteer in his second year of service as an 11th Grade Physics teacher in Mozambique. During his service, he has constructed a library at a local primary school and implemented a community led literacy program and is currently the National Coordinator of the National Science and HIV/AIDS Prevention Fair. An outdoorsman, adventurist and avid ultimate frisbee player, Eric was the latest addition to the team and brings a passion for the environment, an understanding of Mozambican culture and community development experience to the team.

DIRECTOR Paul Yoo: Film producer/director focusing on documentaries that cover social justice issues throughout the developing world. Credits include a landmark public-private film partnership between Warner Bros. and USAID, as well as National Geographic’s INSIDE series. Producer Fellow, Film Independent’s Talent Development Program. His latest work includes a short documentary slate about the due diligence process aiming to reform and legitimize the historically conflict-prone mines of Rwanda and the Democratic Republic of the Congo.

PRODUCER Sarah Garlick: A science and adventure writer and producer concentrating on the Earth, environmental, and conservation sciences. She is the author of Flakes, Jugs & Splitters: an award-winning book about geology, and a new pocket guide to Rocks and Minerals from the National Geographic Society. Sarah is our U.S.-based producer..

CINEMATOGRAPHER James ‘Q’ Martin is Flagstaff based photographer and filmmaker who was born in the Arizona desert and raised in the remote reaches of Alaska.  Q’s work conveys the delicate relationship between athlete and place; inspiring simultaneous respect for the athlete and a reverence for nature. Having a desire to give back to the environment, he co-founded the Rios Libres Project (RL), which seeks to help keep Chilean Patagonia wild.  As part of RL, he has directed the award winning films Power in the Pristine & Streams of Consequence.  jamesQmartin.com /RiosLibres.com

SOUND RECORDIST/MUSICIAN Jacob Bain: a music producer and musician with music score credits for adventure, social, and environmental films ranging from climbing adventures to documentaries about social in-justices and movements towards sustainable energy, most recently the original score for documentary Rios Libres (Streams of Consequence). He has recorded with musicians in Mali, Cape Verde, and Zimbabwe for both film and his own band, Publish The Quest. publishthequest.com

COMPOSER Cheryl Engelhardt: An award-winning songwriter and composer for films, commercials and web content who is known for ensuring that each project on which she works perfectly expresses what the filmmaker, director, production team, brand, or artist wants to communicate to their audience.  She uses music as a tool to extract the full spectrum of emotion available to listeners and viewers. CBEmusic.com

Julian Bayliss: Leader of  the BG Kew Darwin Initiative project in northern Mozambique and Malawi, which resulted in the discovery of the largest rainforest in southern Africa and a host of new species. Conservation scientist and landscape ecologist with extensive work in Tanzania, Uganda, Malawi, Mozambique, Madagascar, and South Africa. Throughout this time I have been involved in coordinating scientific expeditions, undertaking biodiversity surveys, establishing ecological monitoring activities, and implementing management incentives. Julian has extensive experience with large scale project area management, human wildlife conflict resolution, ecological modelling, and ecological monitoring and has been instrumental in many of the recent conservation and science initiatives in Southeast Africa.

Jonathan Timberlake: After living and working in various eastern and southern African countries for almost 30 years, Jonathan now works as Editor of the regional Flora Zambesiaca at the Royal Botanic Gardens, Kew in the UK. At Kew he also leads botanical expeditions and carries out survey work across the region, particularly in Mozambique. He calls himself an applied botanist, with particular interests in vegetation survey, plant ecology and conservation, but has also run a regional NGO in Zimbabwe and carried out numerous project evaluations and consultancies in southern Africa. Fred Boltz: Managing Director for Ecosystems at the Rockefeller Foundation, former Senior Vice President for Global Initiatives at Conservation International and current lead advisor on the Lost Mountain conservation team. Boltz’ deep conservation expertise derives from over 20 years of experience in developing countries across Africa, Asia and the Americas.  Boltz is a natural resource economist with research and publications on the economics, practice and policy of tropical forestry, ecosystem services and climate change. His broad knowledge draws from experience on the front lines of conservation and community development projects in Madagascar and Rwanda, from cutting edge economic research in Brazil and Bolivia, and 9 years leading CI’s global strategies for conservation and sustainable development.

Double your tax-deductible donation with the Positive Tracks Youth Initiative For The Lost Mountain*:

*Learn more about Positive Tracks on the Sponsors page.

The Lost Mountain is a collaboration of scientists, conservationists, and adventurers unified in an effort to survey the biodiversity and conservation needs, to raise awareness, and to build partnerships for the conservation of Mt. Namuli in Mozambique. The study and resulting media (film and radio) will also showcase Malawi's Mt Mulanje and the critical role both mountains play in the survival of East African biodiversity and the advancement of the livelihood of the region’s rural population.

Two women push the bounds of scientific research, climbing conventions, and friendship on the 2,000-ft granite face of Mozambique’s second highest mountain, Mt Namuli. A community-backed film about the spirit of exploration and what happens when adventure becomes a nexus for art, science, and global change.
Scroll